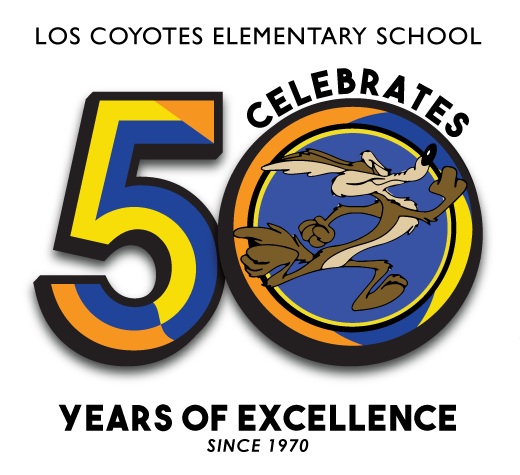 Los Coyotes Elementary School is very proud to celebrate 50 years of education for students. Our school was dedicated on February 7, 1970. We invite you to please share any special memories you have of Los Coyotes Elementary with us (pictures, stories, historical facts)! Do you know where the 1970 School Opening Time Capsule was hidden? Email them to Principal, Dr. Wong at [email protected]
La Palma History
La Palma had the typical southern California history of ranchos, ranchers and farmers. Farmers and ranchers moved to the area in and around La Palma for opportunity, the artesian wells and, in 1905, for transportation on the electric rail line.
In the 1940's dairy farms moved from Los Angeles County south to Orange County pushed out by residential development. By 1955 dairy farming was a $20 million dollar a year industry in Orange County (in today's dollars that's $170.9 million).
But also in the mid-1950's Orange County farmers were also feeling the squeeze of residential development. Dairy farmers in the area that is now La Palma did not want to be annexed by Buena Park which had already tripled its size in two years by annexation. So they created their own "rural" city in order to block development and fight annexation. The new city of Dairyland was 1.76 square miles large with about 500 people and about 15,000 cows. The city council's first act created zoning laws to block tract housing around the dairies. The original city seal highlighted the reason for city hood with the theme "United to Preserve''.
But urbanization continued in Orange County and Dairyland's zoning laws put the property owners at a disadvantage. The farmers could control the developers somewhat but not government entities. Using eminent domain, five different school districts took land from the new city because the farmland was cheaper than the land zoned residential. The school districts took almost 10% of the land. So the citizens of Dairyland voted to change the name of their city to La Palma (after La Palma Ave. which they thought would be the main business street). They also approved bond issues for the establishment of water, sewage and drainage systems. The city master plan was changed to allow for business and residential development. By 1980 there was not a single dairy left in Orange County.
History and pictures from La Palma Library